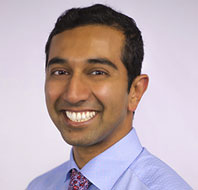 Naren N. Venkatesan received a Bachelor degree in the Plan II Honors liberal arts program and in Microbiology from the University of Texas at Austin in 2005. He then completed his medical degree from Texas Tech University, receiving his MD in 2009. He began his surgical training with an internship in General Surgery at Emory University in 2010. After Internship, he successfully finished his formal residency training in Otolaryngology – Head and Neck Surgery at the University of Texas Medical Branch in Galveston, Texas in 2014 and served as chief resident during the final year of residency.

During his residency, he was exposed to a high clinical volume which allowed him to excel in all aspects of the field. He received a resident research award from the Houston Otolaryngology society in 2012. He was honored with a Pine award in 2014 for excellence. Following residency, Dr. Venkatesan had a special interest in conditions involving the voice, airway, and swallowing. This desire led him to pursue a fellowship in Laryngology and Bronchoesophagology under the training of Dr. Peter Belafsky at UC-Davis, completed in 2015. His additional training gives him expertise in managing these complicated disorders and performing videostroboscopy and transnasal esophagoscopy (unique procedures to assess the vocal cords and swallowing anatomy). In 2015, Dr. Venkatesan became board-certified by the American Board of Otolaryngology.

Care after your operation is very important to your recovery. Please download our Post Operative Instructions document and follow the specific instructions carefully with regard to your particular procedure.

Or you may follow the links below to read specific information regarding your procedure:

Please contact our office during normal business with any questions you may have. Thank you for trusting us with your care.

Dr. Venkatesan was an invited guest on All Things Cancer with Tina Withrow. On this podcast, Dr. Venkatesan answers some basic questions of cancer in the head and neck region. Further, he touches upon his goal to help treat this unique population by managing their voice, airway, and swallowing issues. CLICK HERE to listen.

Dr. Venkatesan treats adult and pediatric patients with a variety of ENT conditions as well as advanced disorders involving the voice, the airway, and swallowing. These include but are not limited to:

Dr. Venkatesan has clinical privileges at the following:

Along with a focus on providing excellent care to his patients, Dr. Venkatesan has published several articles in peer-reviewed journals. His clinical interests include management of dysphagia in cancer patients including post-radiation and cricopharyngeal muscle dysfunction among other topics.